The scrawny poodle with spindly legs and a too-long Dr. Seuss-ish curvy tail was not pretty, but she fit all three criteria. She was 1. a rescue dog, 2. small, and 3. a non-shedder.
It was mid-December of 2009, and the only thing our boys wanted for Christmas was “a new little dog we can cuddle on the couch!” We had strict criteria since we already had a big dog, plus we had allergies. So when I spotted that weird stray dog at the pet shelter, I told the adoption counselor, “We’ll take her!”
“Not so fast. She needs to meet everyone in the family, including your dog.” So we all gathered inside of a small cage-like room, along with our golden-doodle, Murphy. The counselor gingerly brought Dr.-Seuss-Tail into the cage. In a flash, she transformed from a cartoon character into the evil cave rabbit in “Monty Python’s Holy Grail,” snarling and attacking Murphy who was six times her size. Apparently, this was a match made in Hell.
The counselor brought in Dog #2, a sweet stray who simply ignored Murphy. After Evil Dog #1, we were relieved. “We’ll take him!” “Not so fast!” the counselor admonished. “You want a dog that will play with Murphy!”
Dog #3 was a roly-poly poodle puppy. “We’ll take him!” “Not so fast! He’s not house-broken. This won’t work for two working parents.”
I was starting to feel despondent. Suddenly her assistant perked up: “I know just the dog!” She ran to the back room and hauled a fat white fluffy MaltiPoo (half Maltese, half Poodle) from a small cage. Josephine wagged her curly pigtail at Murphy, sniffing and wiggling her pleasantly plump body. Then she greeted each of us warmly, wagging and sneezing. When I picked her up, she felt like a soft teddy bear from my childhood. “We’ll take her!” 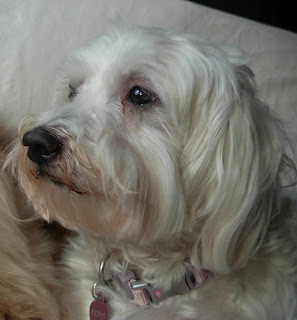 On the ride home, two things happened: we re-named her “Fiona” (after the character in “Shrek”: zaftig and full of inner beauty!) and she fell head over heels in love. With me. Instead of bonding with my boys like we’d hoped, she picked me to be her Human.
When I placed her on the couch between the boys, she’d hop off and follow me out of the room. Worst of all, whenever I left her to go to work, she’d poop in my bedroom.
“This is why her other family gave her up!” my husband growled, scooping up and disposing of her “coming home present” in a wad of paper towels.
At my wit’s end, I decided to bring her with me to work at my therapy office. Little did I know the multiple ways that this desperate decision would pay off.
It’s been almost three years, and Fiona happily accompanies me to work most days, sitting by our front door and staring at me each morning as I gather my purse and keys.
I never meant for Fiona to be a therapy dog, but she had other plans. She’s become our office mascot, a big hit with colleagues and clients. She greets all newcomers in the waiting room, sniffing each foot and pant leg to learn about the poor animal who was not fortunate enough to accompany their Human out the door that morning.
My clients are happy to see her and she greets them warmly, shoving her nose deep into their purse to see if they’ve brought treats. Over this time, four clients have purchased MaltiPoos simply because they were so impressed with Fiona’s calm and loving demeanor.
The shy teenager with anorexia feels her anxiety soothed as she sits on my couch: what teenager doesn’t love a fluffy dog? The mother whose daughter committed suicide runs her hands over Fiona as she weeps over her loss. The shy man with shaky social skills opens up easily as we talk about our dogs. The woman who feels silly grieving over the death of her cat feels that it’s safe to cry here, knowing I’m an animal lover. The man with depression smiles when Fiona reaches her paws up to his knees. The obsessive worrier is calmed by her presence. And when a couple comes in for marital therapy and the tension is thick, Fiona makes herself scarce lest she be the next target of an angry outburst.
The best and most unintended benefit of my canine co-therapist is the effect she’s had on me. For these past three years, I’ve felt calmer, happier and more at peace. Her soft, accepting and always happy presence lowers my heart rate and increases my relaxing alpha brain waves. I wouldn’t even be surprised if she lowers my cholesterol.
Even (and especially) therapists need a little therapy, too.
Posted by Dina Zeckhausen at 9:03 AM 1 comment: